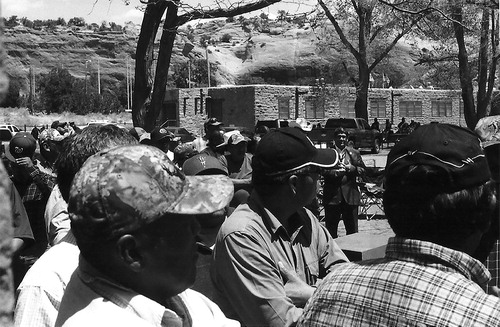 My article on the meaning of work and livelihood for Diné coal workers. The article is Open Access through the Annals of American Association of Geographers website. Here is the link: T’áá hwó ají t’éego and the Moral Economy of Navajo Coal Workers.

The development of coal mining in the Navajo Nation, the largest Indian reservation in the United States, is understood as a consequence of economic dependency, resource curse, modernization, cultural contradiction, and so on. Missing from these frameworks are the perspectives of indigenous actors who participate in these industries. This article draws on ethnographic fieldwork and interviews conducted with Navajo coal workers and community members during a 2013 lease renewal to analyze how a moral economy of Navajo coal workers accounts for the mobilization of Navajo labor in support of the industry, despite years of exploitation and environmental damage. This article’s central argument is that the moral economy of Navajo coal workers is built on a subsistence logic, summarized in the Navajo idiom t’áá hwó ají t’éego, which emphasizes notions of “hard work” on one’s “traditional” land and is produced in the collective conditions of a worker’s union. Even as the future of coal looks bleak, understanding how this folk ideology mobilizes Navajo workers in support of a declining industry gives us a better understanding of the integration of indigenous peoples into capitalist processes. Key Words: coal, indigenous geography, moral economy, Navajo, resource geography.

View all posts by apcurley